Sorry for the long time in between posts. Here is the new coupon. Stop in for our new "Deals" section and for lower prices through out the store.
Posted by Michiana Used Music & Media at 2:26 AM No comments:

Posted by Michiana Used Music & Media at 4:40 PM No comments: 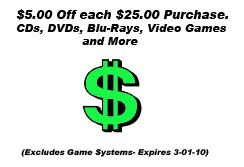 This is our first of many web coupons. Please click the coupon and then print that page. Bring in the coupon and buy $25 or more on any purchase and receive $5.00 off that purchase. Easy as that.
Posted by Michiana Used Music & Media at 12:30 PM No comments:

"Spidey" getting a new look

The film, set to release in 2012, will take place during the high school years, and will no longer be played by the well liked Toby Maguire. He has played the role of the web-slinger for the past three films. Maguire discusses his roles in the first three films, "I am so proud of what we accomplished with the 'Spider-Man' franchise over the last decade," Maguire said in a statement Monday. "Beyond the films themselves, I have formed some deep and lasting friendships. I am excited to see the next chapter unfold in this incredible story." Another change will be the former directer, Sam Raimi will be replaced by a new director(still not named). When Raimi was asked about his time with the Spider-man franchise he says, "While we were looking forward to doing a fourth one together, the studio and Marvel have a unique opportunity to take the franchise in a new direction, and I know they will do a terrific job." This revelation comes the billion dollar purchase of Marvel by Disney. Only time will tell if the "Mouse" will help or hinder the Marvel community.
Posted by Michiana Used Music & Media at 11:35 AM No comments:

There isn't that many new releases this week, but here you go.

The Hurt Locker: The making of honest action movies has become so rare that Kathryn Bigelow's magnificent The Hurt Locker was shown mostly in art cinemas rather than multiplexes. That's fine; the picture is a work of art. But it also delivers more kinetic excitement, more breath-bating suspense, more putting-you-right-there in the danger zone than all the brain-dead, visually incoherent wrecking derbies hogging mall screens. Partly it's a matter of subject. The movie focuses on an Explosive Ordnance Disposal team, the guys whose more or less daily job is to disarm the homemade bombs that have accounted for most U.S. casualties in Iraq. But even more, the film's extraordinary tension derives from the precision and intelligence of Bigelow's direction. She gets every sweaty detail and tactical nuance in the close-up confrontation of man and bomb, while keeping us alert to the volatile wraparound reality of an ineluctably foreign environment--hot streets and blank-walled buildings full of onlookers, some merely curious and some hostile, perhaps thumbing a cellphone that could become a trigger. This is exemplary moviemaking. You don't need CGI, just a human eye, and the imagination to realize that, say, the sight of dust and scale popped off a derelict car by an explosion half a block away delivers more shock value than a pixelated fireball.

Halloween 2: Rocker turned writer-director Rob Zombie returns to the horror field with this visually ambitious and aggressively brutal follow-up to his 2007 reinvention of John Carpenter’s seminal slasher Halloween. The 1981 sequel to the Carpenter film is completely ignored here (and for good reason) in favor of an extension of the central focus of Zombie’s Halloween, and all of his films, for that matter: the corruption at the heart of the nuclear family. Here, Laurie Strode (Scout Taylor Compton) is attempting to heal the psychic wounds from her previous encounter with brother Michael Myers (Tyler Mane) by bonding with Sheriff Brackett (Brad Dourif, a pleasure to watch as always) and his daughter Anne (Danielle Harris, herself a vet from the original run of Halloween sequels). Her previous surrogate father, Dr. Loomis (Malcolm McDowell) has forsaken his connection to Laurie by exploiting his connection to Michael with a tell-all book; meanwhile, Michael himself roams the lonely outskirts of Haddonfield, driven by visions of his mother (Sheri Moon Zombie) and a single-minded urge to bond with his sister at any cost.

Army of Two: The 40th Day: Army of Two: The 40th Day is a third-person shooter based in groundbreaking cooperative gameplay functionality. Sequel to the 2008 game of the same name, and featuring series heroes, Rios and Salem, in this new iteration players have a bigger playbook of features and a new arsenal of co-op moves that either player can perform at any time, opening up fresh strategies in the face of overwhelming odds. In addition, the game features advanced weapon customization and upgrade systems, as well as four explosive online multiplayer modes, each focused on unique cooperative play.

Vampire Weekend- Contra : Like the first album, Contra was produced by keyboardist Rostam Batmanglij and is the realization of a whole and unique musical vision that sees the band stretching out and adding new textures, instrumentation, and rhythms into their sound.Primarily recorded in New York with a springtime sojourn to Mexico, Contra feels altogether fresh, joyous, and like nothing else but is immediately recognizable as the sound of Vampire Weekend.


Ringo Starr- Y Not: 2010 album from the former Beatle and Rock icon. For the first time in one of popular music's most enduring and illustrious careers, Ringo Starr has decided to take charge and produce himself. The result is perhaps the most personal and impressive album of this Rock legend's entire solo career. The joyous result finds Ringo leading a smaller core group of old and new friends including longtime pal and recent brother-in-law Joe Walsh, Dave Stewart and longtime Roundheads member Steve Dudas on guitar, Benmont Tench of Tom Petty and the Heartbreakers on keyboards, Don Was and Mike Bradford on bass. The album also features special guests like Joss Stone, Ben Harper and Richard Marx on vocals, Ann Marie Calhoun on violin and Tina Sugandh on tabla and chanting. Starr's former bandmate and longstanding mate Paul McCartney, who adds a characteristically brilliant bass part to the inspiring 'Peace Dream' and even more notably provides his unmistakably fabulous vocals to 'Walk With You,' an exquisite new composition by Starr and Van Dyke Parks.

Ok Go- Of The Blue Colour Of The Sky: The mind-bending band that gave us what is largely considered the decade's most viewed music video (60M clicks- even the Simpsons parodied it), the treadmillmanned "Here It Goes Again" is back. Never content to rest on their laurels, OK GO is preparing to tread anything but familiar territory with their upcoming new album, Of The Blue Colour Of The Sky.The super creative Ok Go still has the DIY attitude and artistic vision that millions fell in love with. Innovative videos for "WTF?" and "This Too Shall Pass" Syncs for Ok Go have already debuted in Soundtracks, including NEW MOON, the second installment of The Twilight series, The 90210 soundtrack and "One Tree Hill".
Posted by Michiana Used Music & Media at 2:08 PM No comments:

The next chapter of the Prince of Persia is coming. On May 11, 2010, the game will be released on all of the next-gen systems and also on the PC. Forgotten Sands is the follow up to the popular 2008 self titled Prince of Persia game. The game will continue and follow the Prince on his mystical monster filled adventure. This time around there will also be a movie. Jerry Bruckheimer(Pirates,Bad Boys) will be the producer behind the movie. The Prince will be played by Jake Gyllenhaal. Look for the movie to hit theaters on May 28, 2010.

Posted by Michiana Used Music & Media at 1:42 PM No comments:

American Pie: Book of Love
When three East Great Falls High buddies accidentally discover the legendary “Book of Love,” penned by some of their school’s alumni, they embark on a hilariously outrageous quest

District 9
The creatures, it turns out, have been on Earth for years, having arrived sickly and starving. Initially received by humans with compassion and care, the aliens are now mired in blighted conditions typical of long-term refugee camps unwanted by a hostile, host society. With the creatures' care contracted out to a for-profit corporation, the shantytown has become a violent slum. The aliens sift through massive piles of junk while their minders secretly research weapons technology that arrived on the visitors' spacecraft.

(500)Days of Summer
In this quirky romantic comedy about love and fate, a young greeting card writer (Joseph Gordon-Levitt) is hopelessly, helplessly searching for the girl of his dreams...and his new co-worker, Summer Finn (Zooey Deschanel), may just be “the one.” But the 500 days of their offbeat relationship reveal (in no particular order) that the road to happiness can be unpredictable, uncontrollable—and unbelievably funny!

Family Guy Presents: Something Something Something Dark Side
The story of The Empire Strikes Back is retold. Darth Vader (Stewie) is hunting the rebel Luke Skywalker (Chris) and his troops relentlessly across the galaxy. On the ice planet Hoth, Luke has a vision of his late mentor Obi-Wan Kenobi (Herbert), telling him to go to the Dagobah system to learn the ways of the Force under Jedi Master Yoda (Carl). Meanwhile Princess Leia (Lois) finds herself taking a shine to the scruffy pilot Han Solo (Peter) and, against all odds, the two soon fall in love. But an encounter with Han’s old friend Lando Calrissian (Mort) lands them in the clutches of the Empire. Envisioning this, Luke chooses to forgo his Jedi training to save his friends. It all comes to a head in a climactic confrontation with Darth Vader himself…

Music:
Relapse: Refill by Eminem
Stronger with Each Tear by Mary J. Blige
Mudvayne by Mudvayne
Posted by Michiana Used Music & Media at 6:01 PM No comments:

Michiana Used Music & Media
We buy,sell and trade used Blu-rays, DVDs, CDs, Video Games, Gaming Systems and Accessories. We feel that we have one of the largest vintage video game selection in this area. We also deal in used and new vinyl.